After six years of living in San Francisco, Allison and I decided it was finally time to visit the newly re-opened Point Bonita Lighthouse in the Marin Headlands. The lighthouse is still in use for navigation and is operated by the U.S. Coast Guard. The National Park Service provides access to visitors and a very knowledgeable docent was on hand to tell us about the history of the lighthouse.

We parked up by the YMCA and walked down to the lighthouse on a nice path. It was a gloomy day but the weather was calm and we enjoyed iconic views of San Francisco, the bay, and the ocean on our way down to the point. 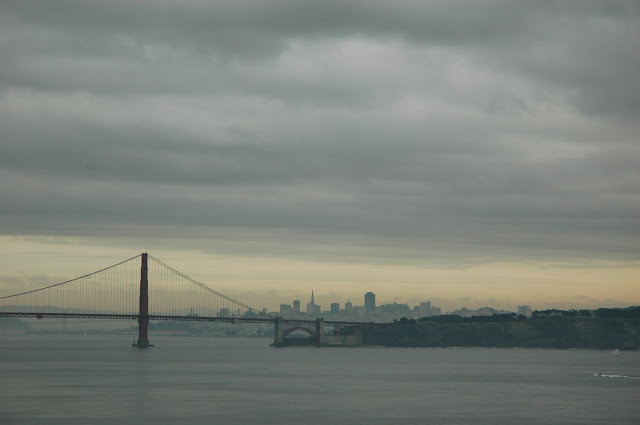 The path winds its way down the hill and traverses a narrow ridge flanked by water on both sides - San Francisco Bay to the east and the vast Pacific Ocean to the west. 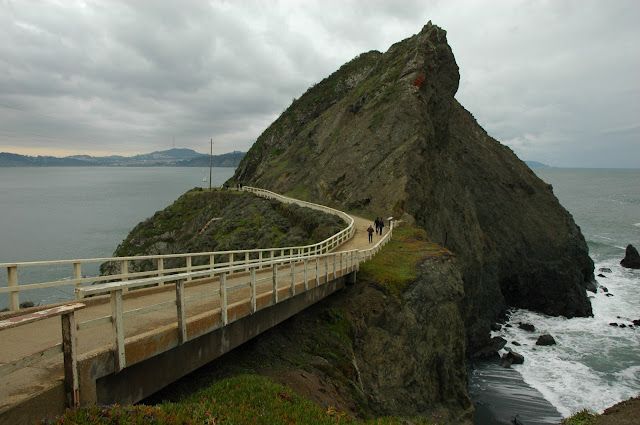 The lighthouse is shielded from view by the rocky point for much of the walk and the steep terrain is negotiated by a narrow dark tunnel. According to my Hayes and Michel book, the lighthouse is perched atop an extensive outcrop of pillow basalts of the Franciscan Complex, formed around 150 million years ago by the cooling of underwater eruptions of lava - pretty cool. A park ranger emerged from the darkness at just the right time to tell me not to walk on the outside of the railing. Oops. 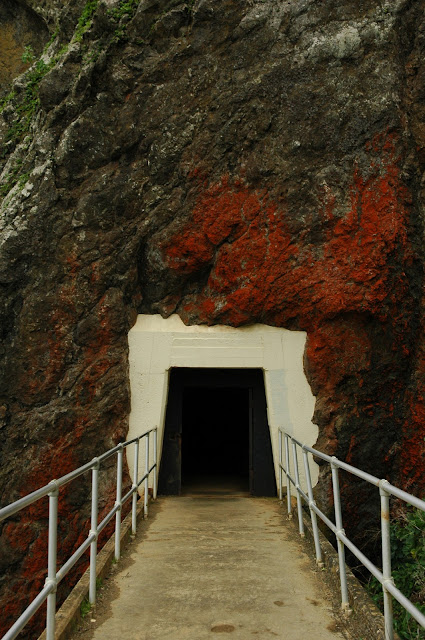 After waiting a few minutes in the dark there was enough of a break in the traffic to snap this photo from inside the tunnel. 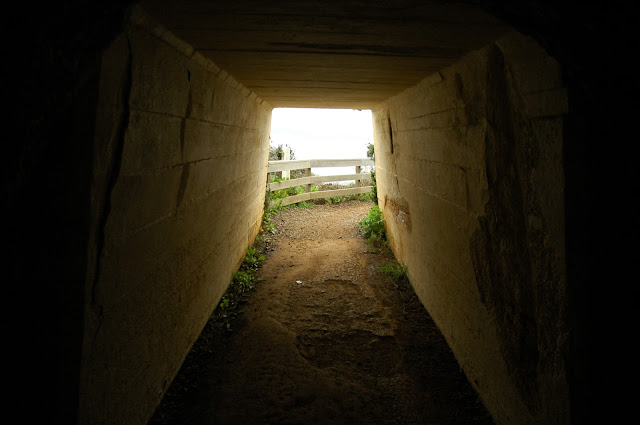 Coming out of the tunnel we finally got a view of the lighthouse perched out on the point! Only a short treacherous section of crumbling rock was left to negotiate. Luckily a sturdy suspension bridge led the way. 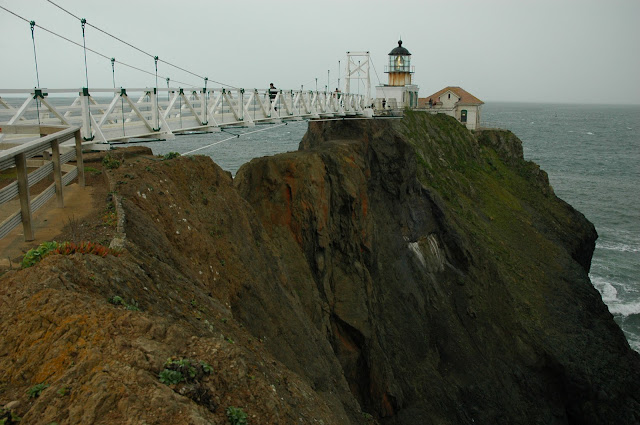 Before crossing the bridge, we checked out the view a bit. I accidentally caught this couple embracing on the leeward side of the lighthouse, sheltered from the wind. 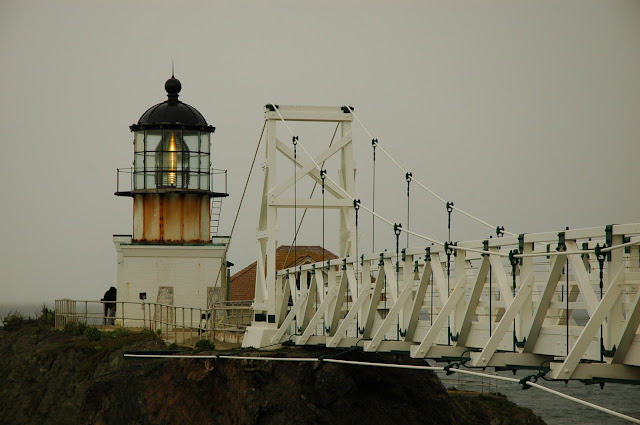 The final approach to the lighthouse is guarded by a suspension bridge which re-opened to the public in April 2012. It may have been my imagination, but it sure felt like the bridge bounced and swayed as we made our way across the 140 ft span. 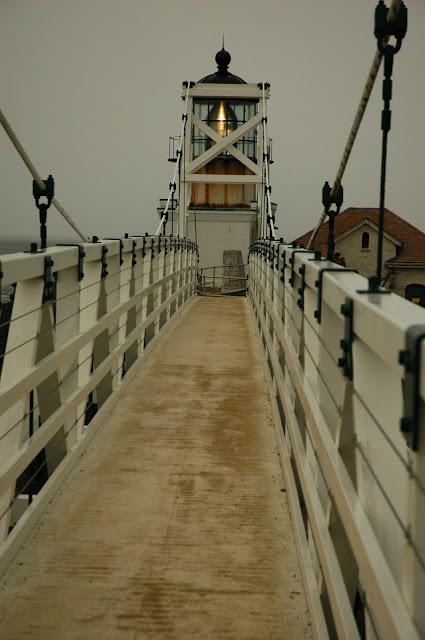 A small museum is open in the lower level of the light tower and was staffed by a NPS docent. According to the docent, the lighthouse was originally built in 1855 up on the bluff immediately north of the point, but was often obscured by the fog and not visible to mariners due to its height 300 ft above the ocean. 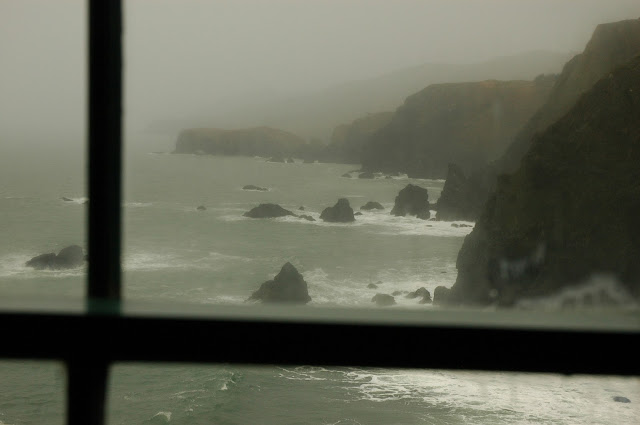 In 1877, the lighthouse was moved to its present location on the point, which improved navigation through the Golden Gate somewhat; however, passage was still dangerous. For many years, mariners had only three points of navigation to guide them through the Gate: keeping Point Bonita to port, Fort Point to starboard, and aiming for Alcatraz. Needless to say, many ships ran aground on the dynamic shoals and rock outcrops. 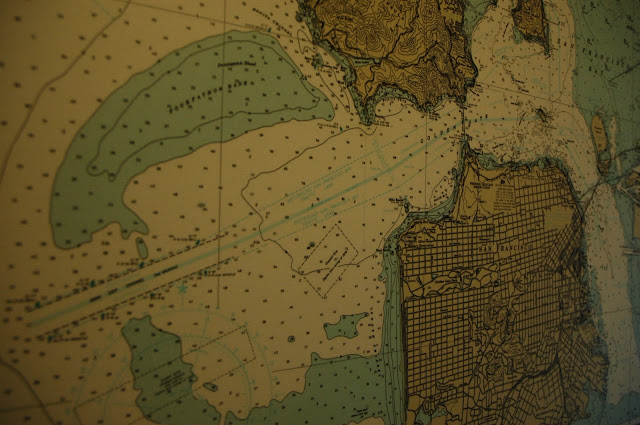 The rain picked up a bit while we took shelter inside but we eventually braved the weather and headed back to the car, glad to have finally checked out this historic landmark! 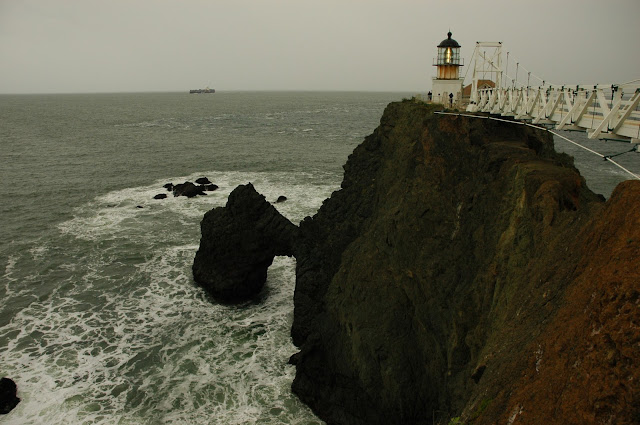 Info from the NPS brochure: Point Bonita Lighthouse is reached by a half-mile trail that is steep in parts. Mid-way along the trail, a tunnel allows access to the lighthouse only during visiting hours: Saturdays, Sundays, and Mondays from 12:30 to 3:30 pm.

Posted by Justin Vandever at 7:20 PM