Geology of the SF waterfront

Last weekend (March 16), I had the pleasure of participating in a one day field trip - the Geology of the San Francisco Waterfront - offered through the Point Reyes National Seashore Association Field Institute. The class was taught by John Karachewski, a geologist from the California EPA.

We started off the day at the Van Ness Pier at Aquatic Park, where John oriented the group to the geography of San Francisco. As you might expect, the geography of the City has a lot to do with its geologic history. The rocks units, or "terranes", that make up San Francisco are the result of complex plate tectonics, uplift, and erosion processes at the margin of the North American plate some 65 to 175 million years ago. As the ancestral Farallon plate subducted (or plunged) underneath the North American plate, pieces of oceanic crust material were transported to and pasted onto the edge of the continent. Some of these rock units were originally formed thousands of miles away in the tropical ocean while others were formed just offshore, as sediments were eroded from the mountains and deposited in a submarine trench. These rocks and sediments were then buried deep within the earth, heated and compressed, and later brought up to the surface through uplift and erosion of the overlying material, exposing the San Francisco we see today. The photo below shows John talking about the various terranes that comprise San Francisco, with Alcatraz Island in the background.


Speaking of Alcatraz, we learned that Alcatraz Island is primarily comprised of the same thick beds of sandstone and other rock units that form some of the higher hills in the northeast part of the City (such as Telegraph Hill, Russian Hill, and Nob Hill). The photo below shows the steep sandstone cliffs along the shoreline of Alcatraz.  Looks like a lovely place to spend a vacation!


Our next stop was Crissy Field, a former tidal lagoon once filled to build a military airfield and recently excavated to create (or re-create), you guessed it, a tidal lagoon!  We arrived around low tide and there were quite a few shorebirds wading in the shallow waters and intertidal sand and mudflats. While at this stop, we discussed global climate change and sea level rise and its implications for the landscape of the Bay Area. Approximately 18,000 years ago, at the peak of the last ice age, sea level was roughly 350 ft below its present day level. The "Bay" as we know it today did not exist and instead the rivers of the Sierra Nevada flowed down to a great river valley, ultimately flowing through a steep gorge at the Golden Gate and out to the ocean across the continental shelf. Only time will tell what changes future sea level rise may cause along the California shoreline. One thing is for sure, the coastline will look a lot different by the end of the century than it does today!


After Crissy Field we moved on to a great renovated viewpoint at Battery Godfrey. I had never been here before, believe it or not, and it was quite a site! The overlook had a great view of the Golden Gate Bridge, Kirby Cove (straight across the Bay in Marin), and Marshall Beach below. In the photo below, you can see a great exposure of a serpentine landslide, a rock formed at mid-ocean spreading centers many millions of years ago. Another interesting fact about serpentine rocks is that the heavy metal, low nutrient soil derived from them is toxic to many plants, a characteristic that favors the native slow-growing plants of San Francisco!

From Battery Godfrey we headed over to the Seacliff neighborhood and walked down the steps to China Beach. According to the monument at the parking lot, China Beach got its name from the Chinese fisherman who moored their boats in the cove and camped on the beach during the gold rush era. At this stop, we looked at some of the rock exposures that illustrate the extreme complexity of the geologic processes that formed the rocks we see here - sandstone, chert, and pillow basalts all mashed together in one big confusing mess!


Next, we headed out to the Lands End/Sutro Baths area, which is part of the San Bruno Mountain terrane. The rocks here consist mainly of thick sandstone beds that were deposited as part of a submarine fan at the edge of the North American plate around 100 million years ago.


In some outcrops, the sandstone beds alternate with beds of shale (finer sediments). These alternating beds can be seen on the trail down to the sea caves, at the north end of the Sutro Baths ruins. The sediment layers likely represent what are referred to as turbidity currents, which are very dense mixtures of sediment and water that flow along the ocean floor. Turbidity currents are one way that sands and muds in the nearshore area are carried down submarine canyons and out to deepwater.


Our final stop was the bluffs at Fort Funston, at the southern end of the San Francisco shoreline. In geologic time, these bluffs are quite young, formed only a few hundred thousand years ago. Much of the bluffs is comprised of the weakly consolidated sands, muds, gravel, and silt of the Merced Formation, which formed in a sandy coastal dune and nearshore environment. Due to their soft nature, these bluffs are easily eroded by wave action and this stretch of coastline exhibits very high erosion rates and incredibly large landslides (such as the Thornton Beach landslide during the 1982-83 El Nino winter). In the photo below, the point in the distance is Mussel Rock, which represents the point where the San Andreas fault runs offshore out into the ocean (it intersects the coastline line again as it runs through Bolinas Lagoon, Tomales Bay, and Bodega Bay farther north). Here, at Fort Funston, we see geologic processes acting on a much faster time scale, with ongoing marine and terrestrial erosion of the bluffs, compounded by the periodic seismic shaking and instability of large earthquakes along the nearby San Andreas fault (such as the 1906 and 1989 quakes).

Overall, it was a great trip with a very knowledgeable guide.  Thanks to John Karachewski and the Field Institute for a great day by the coast!

Note: The following web resource was also consulted to verify my recollection of the concepts discussed during the field class ((c) Ted Konigsmark): http://www.geologictrips.com/sf/sfttsf.pdf.
Posted by Justin Vandever at 10:13 PM 1 comment:

Want a bird's eye view of the CA coast?

As a practicing coastal engineer and scientist, I have long benefited from an amazing resource unique to the California coast - the California Coastal Records Project (CCRP). The CCRP is an online database of aerial photographs that cover nearly the entire California coastline. Started by Gabrielle and Kenneth Adelman in 2002, the site provides a unique perspective usually reserved for those lucky few who have experienced a helicopter ride above California's beaches.

The Adelman's photography provides what is referred to as an "oblique" aerial view - that is, an aerial image taken at an angle to the shoreline. By flying just offshore at an elevation of approximately 500 ft, they are able to capture a side view of features such as cliffs, bluffs, seawalls, etc., that are difficult to interpret from a typical aerial image alone.  For reference, here's a typical aerial image from Google Earth, taken of San Francisco's Great Highway just south of Sloat Boulevard:


When you examine this stretch of coastline in the aerial, you can easily identify that the parking lot appears to be quite close to the shoreline and that the beach just west of the parking area looks to be at least partially armored with rock. You can also see a more substantial revetment to the south of the parking lot and a spot in between the two armored sections that appears to have experienced more substantial erosion. Certainly, zooming in helps resolve these features in finer detail (see below), but you have limited sense of the topographic relief in the image. For example, is the parking lot on high ground? Is it vulnerable to flooding or wave overtopping? It's hard to tell exactly what's going on here - especially if you don't have the benefit of a site visit or familiarity with the area. 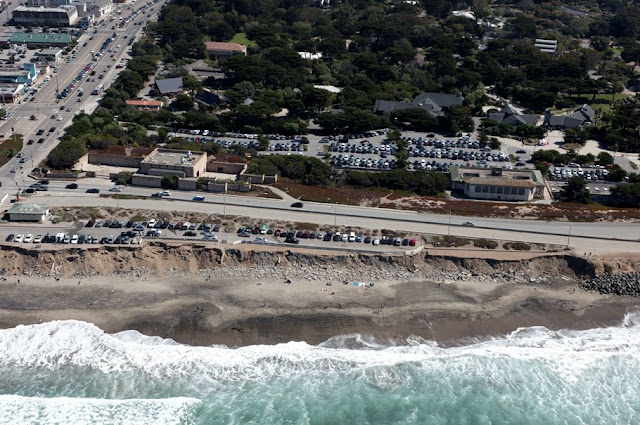 Oh my gosh! What a mess! With the benefit of the oblique aerial you can truly tell what is going on here. We see that the parking lot is elevated on a low bluff along the back of the beach and that there is all sorts of rubble and debris on the beach at the base of the bluff. This is certainly San Francisco's most troubled stretch of shoreline. (Note this is within the area of sand nourishment from Fall 2012 - see my time comparison photos here. The good news is that the City has partnered with SPUR to help develop solutions to the shoreline erosion occurring here and develop a master plan and vision for the future of Ocean Beach).

I'll leave it to you to explore the Coastal Records website, but let me give a few pointers. First, here's a screenshot of the main navigation page: 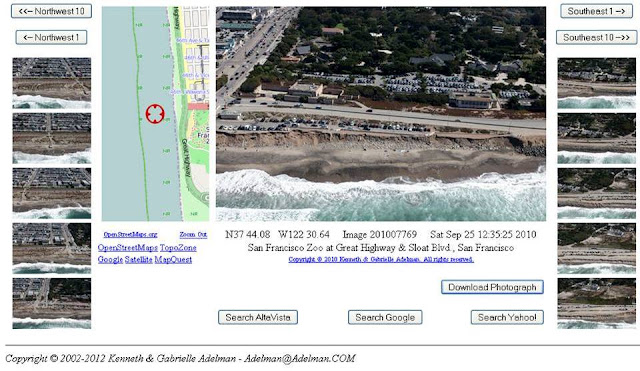 Each photograph is georeferenced with latitude/longitude coordinates so it can be placed on a map. The navigation panel shows you the oblique aerial along with its location. You also get a preview of the adjacent upcoast and downcoast photos.

What's really neat about this site is that you can essentially "fly" along the coast and see any stretch of coastline you want to look at! Use the "Northwest" and "Southeast" buttons to jump either 1 or 10 photos in either direction, depending if you want to head to the north or south. You can also click on the map for a specific location or search for a place name from the main page - both are useful tools.

In addition to viewing the most current oblique aerial imagery, you can also view historical images, some of which dates back to the 1970s. This can be really interesting to see how the coastline has changed over time. For example, I have compared images over time to identify locations of bluff failure and to help understand rates of bluff retreat at the Daly City outfall at Fort Funston.

Certainly, an aerial tour of the California coast would inspire anyone and the variety of coastal features is impressive, to say the least. That said, I have been repeatedly shocked and appalled by some of what I have discovered through this photographic database because it reveals much of the destruction of our coastline that is often hidden from view. Here are few culprits that really get me going!

I highly recommend browsing this great resource and see what you can find for yourself! Maybe you can find a new beach to explore or do a little aerial reconnaissance before your next hike.  Enjoy!