Overview
California's March 1-2, 2014 storm caused quite a stir up and down the coast from the San Francisco Bay area to San Diego. According to the National Weather Service report on the event, an intense low pressure system developed off the California coast and persisted from February 26 to March 2, 2014. The system produced heavy rain, strong winds, flooding, thunderstorms, damaging winds, small hail, and high surf. Orographic lift produced large rainfall in the Santa Cruz and Santa Lucia mountains. Offshore winds reached 55 mph and peaked at 71 mph along the mountains of the Big Sur coast.Coastal impacts were mainly felt in southern California due to unusually large wave exposure. The slow movement of the low pressure system, southerly track, and strong winds created a large fetch over the open waters of the Pacific which led to large wave heights impacting the coastline in otherwise sheltered areas reminiscent of El Nino-type storms.


The wave forecast was also quite formidable, with large offshore wave heights approaching 30 feet with a westerly angle of approach, according to Surfline.

I reviewed the National Data Buoy Center offshore wave measurements over the period from March 1-2, 2014 and pulled out the peak wave conditions over that time. As you can see, the highest offshore wave heights were along the San Luis Obsipo and Santa Barbara coastlines. This is consistent with the Surfline forecast shown above which shows the maximum wave heights off of Point Conception. Also of note is the predominant westerly direction of the buoy measurements, which generally show waves approaching from the W or WSW. Once you get into the southern California bight, the offshore islands start to play a role in determining which coastal areas were hardest hit, as the islands shelter some areas more than others.


I won't focus too much on the precipitation impacts, other than to note that precipitation was widespread across the state and that there was a lot of it! The NWS precipitation totals are shown below. The highest rainfall totals in central California reached 10+ inches in the Big Sur Mountains and parts of southern California. 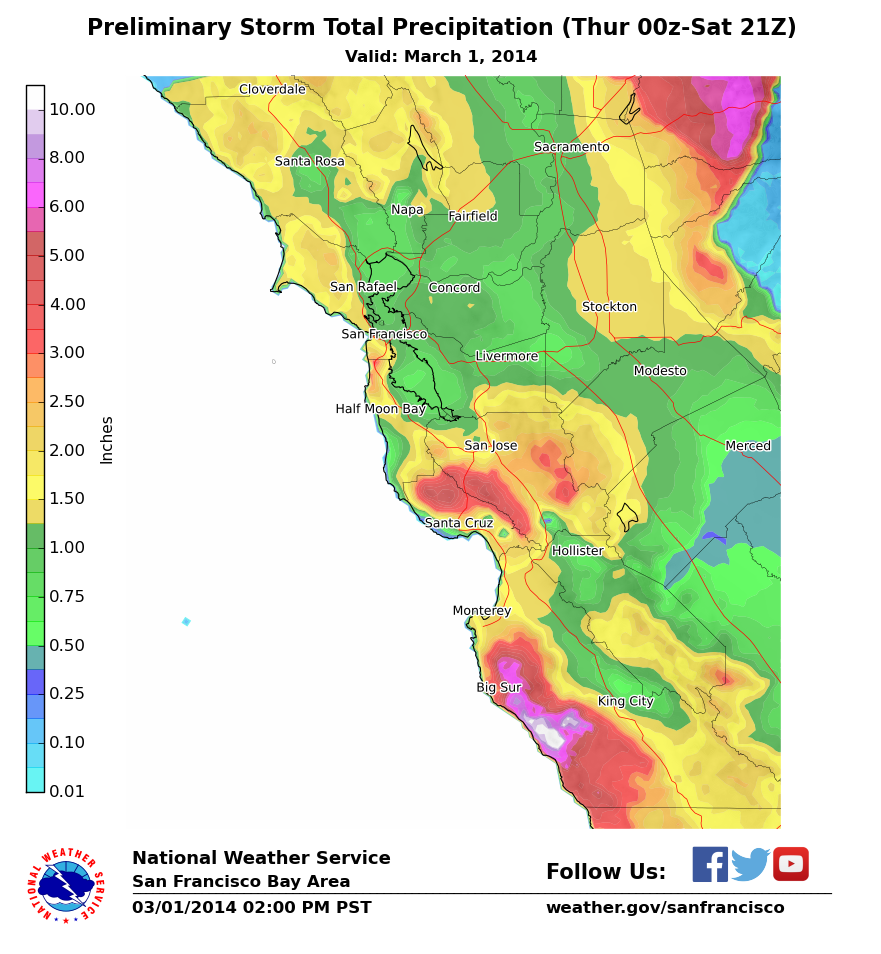 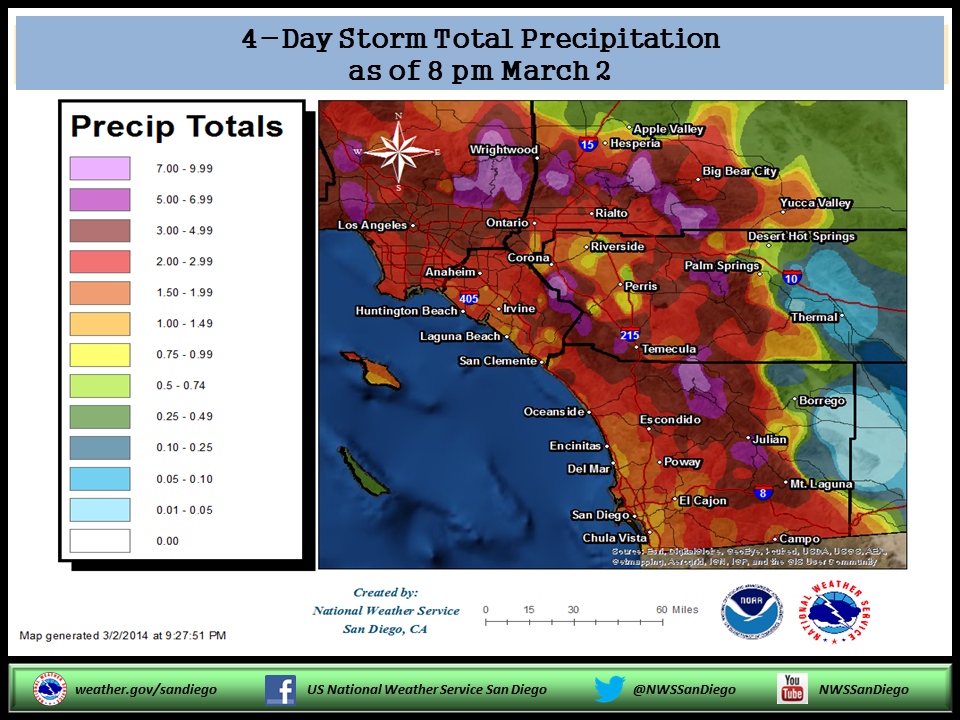 County Summaries
Santa Cruz
Santa Cruz County was the most northern county to feel significant impacts from the storm, primarily due to its southern exposure. In the City of Santa Cruz, large waves impacted the shoreline. Waves crashed up and over the breakwater at the Walton Lighthouse at the Twin Lakes harbor entrance.


High runup was also observed from waves impacting the bluff at Lighthouse Point. The story has it this guy lost his board shortly after jumping in and had to swim back ashore.

Along West Cliff Drive, a 10x10 ft, 40-ft deep sinkhole opened up due to undermining by wave action on the bluff. The sidewalk was damaged due to the pressure of breaking waves forcing their way up into the cliff. One lane of traffic was closed while crews assessed the stability of the bluff.


Along the Santa Cruz Boardwalk, waves washed up onto the beach back to the seawall, but there were no reports of damage or overtopping.


The Capitola waterfront, with its long history of flooding, probably saw the worst of the storm's impacts. Waves washed over the Esplanade seawall, reaching cars in the parking lot. Wave overwash combined with urban runoff to flood the downtown area businesses. Waves crashed into the deck of the restaurants at the Soquel River mouth, but business was reported to resume the next day.

San Luis Obispo
San Luis Obispo also experienced some dramatic wave action due to strong waves making their way around the breakwater and impacting the shoreline. At Port San Luis, waves washed over the revetment into the parking lot just north of the boat launch. 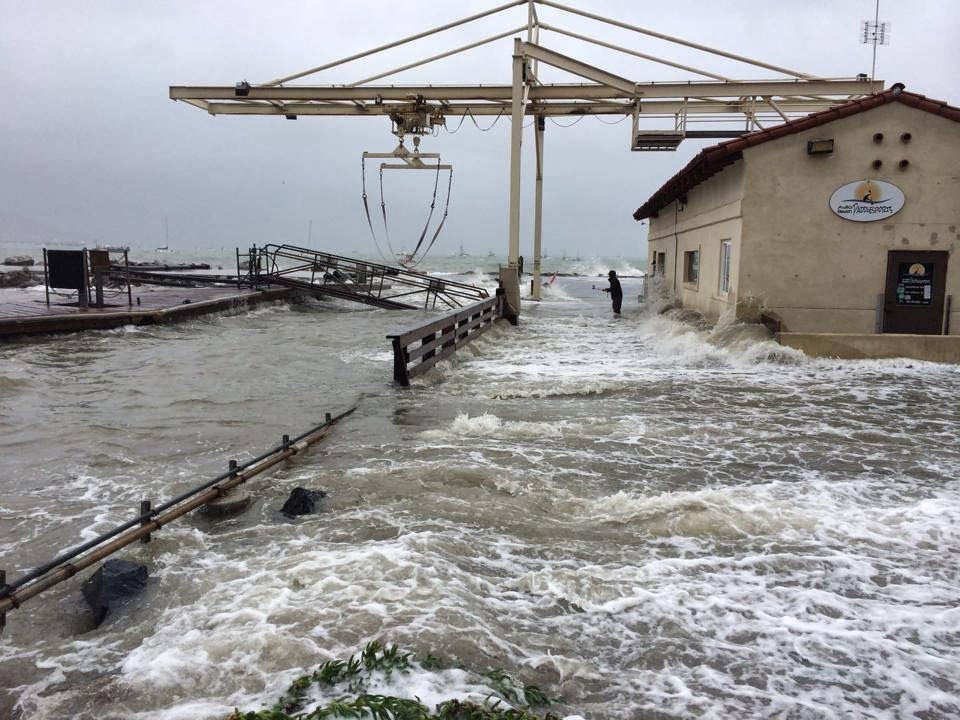 The folks at Avila Beach Paddlesports captured some great video of the wave overwash. Search "avila beach storm" on youtube for more videos.


Avila Pier was damaged and closed. Boards on the pier were lifted up from the waves during the morning high tide. Residents were quoted as saying they couldn't remember tides and waves this high.


At Pismo Beach, waves washed all the way back to the boardwalk and seawall. City personnel had to encourage folks to stay off the beach for safety reasons.

Santa Barbara County had some of the most dramatic stories come out of the storm event. According to the Santa Barbara harbor patrol, they experienced high tides in excess of 6 ft and waves up to 12 ft. Elsewhere, waves averaged 10-15 ft with crests up to 18 ft. At the Moby Dick restaurant on Stearns Wharf, a wave crashed through the window during breakfast:

Waves also inundated the beach surrounding the Santa Barbara Yacht Club and flooded the back beach area, depositing sand around the Yacht Club building and causing general chaos in the parking lot.

At Goleta Beach, waves crashed through the Beachside Bar and Cafe. A restaurant manager was washed out into the ocean and dislocated his shoulder (but made it back to shore!). The restaurant was flooded with seawater and the outdoor patio area was damaged. The Goleta Pier was pounded by waves and some planks were displaced. Three boats broke loose and washed ashore on the beach. The beach area was evacuated for safety reasons. News videos and photos of the storm damage suggested that water and sand washed into the parking lot.


At Gaviota State Beach, a 50-ft section of the pier was destroyed sometime before 830am on March 1. Waves were reported to be breaking over the top of the pier. Wave runup was reported to surge up the beach and into the parking lot and restrooms. On the beach, sand was eroded and exposed cobbles.


Ventura
There were not too many reports of damage along the Ventura County shoreline. Some very large waves were documented at the Ventura Pier:

At the Point Mugu Naval Base, sand washed up and over an access roadway along Family Beach, inundating approximately 300 feet of the road along the Mugu Lagoon west spit and depositing approximately 6 inches of sand in some places.

Orange
There were not too many reports of damage along the Orange County shoreline. At Newport Beach, a predicted tide of 6.25 ft reached 7 ft. Trucks were brought in to pump the storm drain system to keep the streets from flooding.

An oil platform offshore of Huntington Beach experienced some large waves but there were no reports of storm damage.

Los Angeles
There was a fair amount of news out of Los Angeles in response to the storm. Large waves on the order of 8-12 ft were observed at Zuma Beach. Waves pushed past the concrete barriers along the back beach and into Parking Lot #4. Life guard towers had to be pulled back and the beach eroded 30-50 yards. In Malibu, at least one balcony stairwell was destroyed at a condo unit.

In Playa del Rey, a 200 ft bikepath was covered in a few inches of sand and debris and beach erosion was observed. The bikepath was also covered near Dockweiler State Beach.


At Redondo Beach, the King Harbor Yacht Club was closed and harbor operations were interrupted on March 1. Waves on the order of 20-25 ft were reported to be hitting the breakwater. Overtopping waves created a surge in the harbor and ripped cleats off the docks and broke mooring lines. Several boats were moved to prevent breaking free from the docks. Waves washed over the wall into the parking lot. Damage was less than the January 1988 storm due to improvements to the breakwater following that storm event.

Surfers at Redondo Beach reported the swell to be the biggest in 31 years.

At Cabrillo Beach in San Pedro, waves rushed over the breakwater, causing significant beach erosion and sand overwash into the parking lot. In Long Beach, high surf breached a sand berm along East Ocean Blvd. Water caused minor damages in the garages and lower levels of about 20 homes between 66th and 72nd place near Alamitos Bay.


San Diego
San Diego County also experience some flooding from the storm. At Imperial Beach, waves were 8-12 ft and sand and waves washed approximately 80 ft inland at the end of Palm Ave to the Spirit of Imperial Beach statue. Water flooded a condo garage on the north side of Cortez Street and waves were breaking offshore of the pier.


In Coronado, city crews did not recall such high surf and tides in many years. Beach berms and sand stockpiles were reported to be successful in stemming the high tides. Much of the sand on the beach eroded though and sand berms needed to be replenished and rebuilt, particularly along South Beach.

If you have any photos or stories from the storm please let me know. I would love to include them in this post!

Posted by Justin Vandever at 7:01 PM